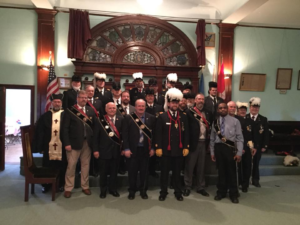 On Saturday March 24, 2018, the final Commandery Inspection of the year was held in Lancaster. Eight new Sir Knights joined the ranks of the Order. There were 41 Knights Templar present for the occasion.
The combined talents of members from Concord joined with Lancaster to put on an impressive event.
This was the final Inspection for our Right Eminent Grand Commander, Sir Knight Paul C. Smith.  His two year term will conclude at the annual Conclave of the Grand Commandery, which will occur on May 12th in Concord.
Dennis A. Sheridan, Grand Recorder