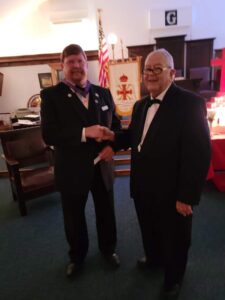 Granite State Conclave of Concord, NH met on January 28, 2012 in a Stated Conclave where three new members were inducted into the Order of Knights of the Red Cross of Constantine. This was the first meeting with the new Officer Line which went well. Following the degree, a lot of business was supported including proposing a change of by-laws as recommended by the Grand Imperial Council.

A social hour was enjoyed following the meeting, and an excellent dinner prepared for those in attendance.